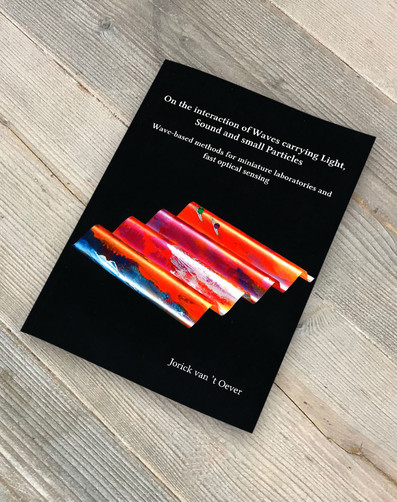 The main theme of this thesis is waves: sound waves for trapping, guiding or mixing suspended particles, and light waves for making sound waves and rough surfaces visible. One of the important functions on a Lab-on-a-Chip system is suspended particle manipulation and concentration. One way to achieve this to use acoustophoresis: using acoustic waves to concentrate small particles from water. A hybrid acoustophoretic mode, combining streaming and concentration behavior, is observed during the transition from acoustic radiation-force to streaming Stokes drag-force dominated behavior. Numerical calculations show concentration of polystyrene particles down to 100 nanometer in diameter in the streaming region close to the walls. Simultaneous excitation of multiple harmonic modes allows more complicated force fields which can improve or degrade the concentration performance. This is a step towards engineering of streaming patterns for acoustophoretic concentration of submicrometer particles. Another important function in a Lab-on-a-Chip is mixing. Acoustic streaming can be used to purposefully induce local mixing flows. A centimeter-scale acoustic micromixer is fabricated using Direct Laser Writing, consisting of many cuboid micropillars. Analysis of the structures using Confocal Laser Scanning Microscopy shows that a trade-off must be made between writing time, accurate structure placement and initial alignment. The fabrication method allows for additive manufacturing of micromixers into existing microfluidic systems.An optical method to directly measure the acoustic modes inside a microchannel using stroboscopic white-light interferometry was developed. The acoustic field, both amplitude and phase, is determined by measuring the acoustically induced optical delay using stroboscopic illumination. The pressure distributions are measured for the fundamental pressure resonance in the water and two higher harmonic modes. The optical characterization method can be used to improve the design of acoustic microresonators in microfluidic systems. The white-light interferometric imaging technique can also be applied to other problems. As a spin-off we used this method to measure micro-cracks in railroad tracks.