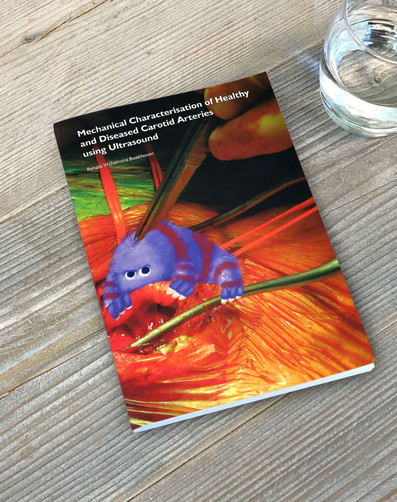 Cardiovascular disease (CVD) is the leading cause of death in economically developed countries. Annually, over 17,5 million deaths are caused by CVD worldwide. In Europe, CVD causes over 4 million deaths each year, which is nearly half of all deaths in Europe (48%). Stroke is an important cause of cardiovascular death, where atherosclerotic plaque rupture in the carotid artery is the leading cause of stroke, responsible for 15-20% of all cerebral infarctions. When plaque rupture occurs, the content enters the bloodstream leading to the formation of a blood clot, which could lead to a cerebral infarction or a transient ischemic attack (TIA).

Carotid endarterectomy (CEA) is the procedure of choice in patients with a 70-99% stenosis. During this procedure the plaque is separated from the healthy arterial wall. However, only one out of six patients benefits from this intervention. Furthermore, nine interventions need to be performed in the symptomatic population, to save one stroke, and as much as 19 interventions in the asymptomatic population. Hence, the size of stenosis alone is not a reliable predictor for plaque rupture. Plaque composition and activity are thought to be useful predictors of future thromboembolic events as well. Hence, identifying patients at high risk of stroke in an early stage would permit timely intervention of smaller stenosis, while substantially reducing overtreatment of larger plaques which are now all considered for surgery according to the current guidelines. Not only will this reduce costs, but it will also avoid unnecessary risks for the patient.