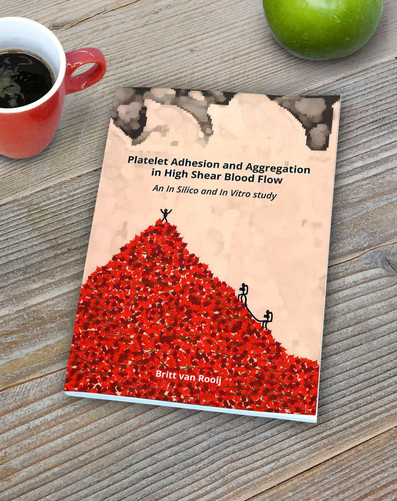 Our body prevents us from bleeding by blood clot formation. However, when a blood clot continues to grow, it can obstruct a blood vessel. This process is called thrombosis and may lead to disability or dead. Two types of thrombosis can be distinguished: venous and arterial thrombosis. On the one hand, in the case of venous thrombosis the blood flow is slow or even stagnated (low shear rate < 1, 000 s−1). The clot formation starts after a trigger caused by a thrombogenic surface. The coagulation plays an important role in this process. Venous thrombosis leads to the formation of a blood clot that mostly contains red blood cells. An example is deep vein thrombosis in a persons leg. On the other hand, in case of arterial thrombosis the flow environment in which a clot starts to form is important (high shear rate > 1, 000 s−1). The following three components are found to be necessary to form a clot: a thrombogenic surface, high shear rates and the biological components: von Willebrand factor and platelets. The von Willebrand factor plays a major role in the binding of platelets and its behavior is sensitive to the shear rate. This sensitivity is still not fully understood. However, it is known that the globular shape of von Willebrand factor is coiled and that it can uncoil when it is exposed to high shear rates in the blood flow. When uncoiled, many binding places for platelet binding receptors become available. The clots that are formed in this environment are platelet-rich. Examples of high shear thrombosis are a stroke and a myocardial infarction. A phenomenon that can influence the formation of a blood clot is the margination of platelets. Platelet margination is the process that causes a higher platelet concentration close to the blood vessel wall. The interaction between red blood cells and platelets causes translocation of platelet. However, the underlying process of margination is not fully understood yet. Margination might influence the availability of platelets during platelet adhesion and aggregation. Due to margination a layer is formed with a high platelet concentration and no or a few red blood cells, called the cell-free layer. In this dissertation high shear arterial thrombosis is considered. The influence of blood flow on initial aggregation of platelets is studied. In order to do so, cell-based simulations and in vitro experiments are used.