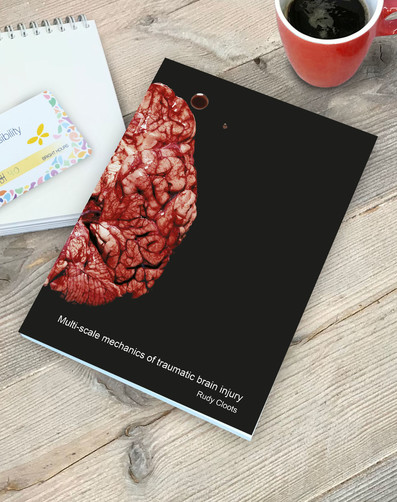 Traumatic brain injury (TBI) can be caused by road traffic, sports-related or other types of accidents and often leads to permanent health issues or even death. For a good prevention or diagnosis of TBI, brain injury criteria are used to assess the probability of brain injury as a result of a mechanical insult. TBI is concerned with a wide range of length scales from several decimeters at the head level, where the mechanical insult is applied, to several micrometers at the cellular level, where the actual injury occurs in case of diffuse axonal injury (DAI). However, a well-defined relation between these levels has not been established yet. The most used method to assess the likelihood of brain injury is based on head level kinematics, but suffers from a number of drawbacks and does not consider the mechanisms by which brain injury develops. Finite element models are being developed to predict brain injury based on tissue level injury criteria. Because most finite element head models used nowadays for injury prediction do not contain anatomical details at the tissue level, the first part of this research is concerned with the influence of the heterogeneous substructure of the brain on the mechanical loading of the tissue. For this, four finite element models with different geometries were developed, where three models have a detailed geometry representative for a small part of the cerebral cortex including the sulci and gyri. The fourth model has a homogeneous geometry and it is used together with the heterogeneous models to analyze the influence of the morphological heterogeneities in the cerebral cortex. The results of the simulations show concentrations of the equivalent stress that correspond to pathological observations of injury in literature. This implies that tissue-based injury criteria may not be directly applied to most computational head models used nowadays, which do not account for sulci and gyri. The next step in this research is involved with the relation between the tissue and the cellular-level mechanics since the microstructural organization will affect the transfer of mechanical loads from the tissue level to the cellular constituents and will thereby affect the sensitivity of brain tissue to mechanical loads. According to literature, discrete axonal impairments caused by a mechanical insult on the brain are located where axons have to deviate from their normal course due to the presence of an inclusion, such as a blood vessel or a cell body. Based on the hypothesis that the observed discrete injuries are caused by the micromechanical heterogeneities, finite element models representing a critical volume for discrete local impairment of the axons have been developed. From the results of these simulations, concentrations of axonal strains are located at similar locations as the axonal impairments. Furthermore, it is concluded that the sensitivity of brain tissue to a mechanical load is orientation-dependent. In a multi-scale approach, finite element models of the head and the axonal level are coupled, where it is observed that the maximum axonal strains do not correlate with the strain levels of the head model in a straightforward manner. An anisotropic criterion for brain injury based on tissue-level strains is proposed that describes the orientation dependent sensitivity of brain tissue to mechanical loads and is derived from the observed axonal strain in the micromechanical simulations. With the anisotropic brain injury criterion, computational head models will be able to account for aspects of DAI at the cellular level and will therefore more reliably predict injury.